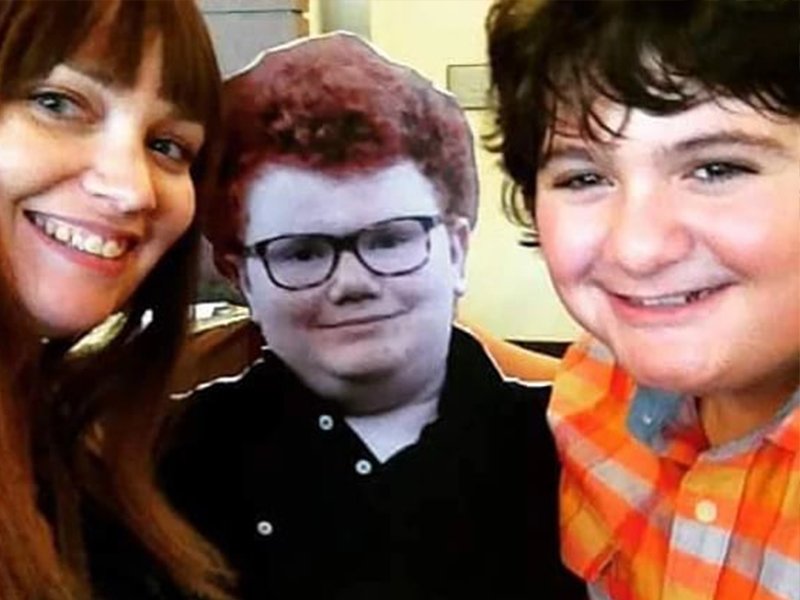 My grandparents have no photographs from their childhood. Growing up, this was a prominent theme in my world. As I learned more about the circumstances leading to the loss of all the family photographs, I promised myself that my kids would have tons and tons of photographed memories. Great plan. Enter the ASD Bar Mitzvah Challenge. My son, with Aspergers, ADHD and Anxiety doesn’t just dislike having his photo taken–it is mentally painful. The posing, the “look at the camera,” … the other people (grandparents, siblings, friends, etc) who may be in the photograph too and who may try and touch him. All of this makes my boy so anxious, that it hurts his brain.

Much of the time, we are ok with this and have reached compromise – he will manage through the taking of just one pic… “to commemorate the moment.” Some of the time, just one photo isn’t enough. Like at his Bar Mitzvah, the Jewish ritual coming of age celebration that takes place at 13 years old. It is a once in a lifetime celebration and people from near and far come to share. There is a tremendous amount of learning, practicing, preparation and then presenting/performing. When the day finally arrives, it is something you want to photograph. Commonly, a professional photographer is hired to document the day – there are staged photos and unstaged photos and sometimes even a photo booth for added entertainment. That this is “what we do” did not make it more manageable or less painful for my Bar Mitzvah boy. It actually added to the anxiety.

It was not an option to have zero photographs of this amazing day. Not even an option to have just one. The solution came to me while I stood in line one Saturday morning at a local juicery. Right by the cash, they had a life size cardboard cut out of their celebrity spokesperson. This was particularly funny because their spokesperson was an extremely tall professional basketball player. As I stood in line, my youngest son ran over to the cardboard spokesperson and said, “Mom take a pic of me with fake X!!!!!” Bing, bing, bing…. Houston, we have a SOLUTION!!!!

I immediately set out to determine what company makes those lifesize cardboard cutouts. Not surprisingly, there are many online… and one local company who could make me as mannnnnnny fake Bar Mitzvah boys as I wanted!

I ordered one for the front foyer to greet the guests as they entered the synagogue and I ordered one for the photo booth. In the “All About This Bar Mitzvah” program that we distributed to each guest, we explained the Bar Mitzvah boy’s extreme discomfort with having his photo taken. We invited anyone who wanted a photo with the guest of honour to grab a fake version and strike as many poses as they would like!!!

Everyone helped us have lots and lots of photos of our Bar Mitzvah boy on his big day… and he only had to pose once (when I took the original photo used to create the cutouts).

We have a great big photobook commemorating our son’s Bar Mitzvah. And he is even in the photos! Tons of them. Looking happy. No meltdown. Less anxiety. Just smiley awesome memories. For him and for us.

The cardboard cutouts now live in our front vestibule. They are very amusing to our neighbours and hopefully, very distracting to potential thieves or other shady characters. When it came to a “Me and my boys” photo to accompany my bio on this website, it was actually my eldest who suggested we take his cardboard twin. Not because he was unwilling to participate himself, but because he thought people would appreciate the concept.

The fake cardboard cutout Bar Mitzvah boy conquered this particular challenge. It worked. It was a very untraditional and unexpected solution. It was the result of some very outside of the rhombus thinking. But it worked. And we are all happy. 🙂

On Motherhood and the Art of Not Dropping the Ball

NowWhat? is a private clinic based in Ancaster, Ontario. We are a multi-disciplinary therapeutic clinic providing clinical, community-based & in-home services in Greater Hamilton, Halton, Brant, Niagara, Haldimand and the GTA.
We are also available for remote consultation and support across North America.
Our services can be accessed using many employer benefit plans, Ontario Autism Program funds, Special Services At Home funds, and Passport funds.
We are a social enterprise, working towards our Living Wage Certification and giving back to the community in the form of education, advocacy and subsidized services for vulnerable populations.